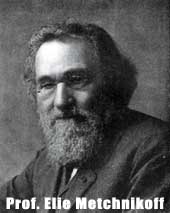 As far back as our records will take us, man has used the art of fermenting foods to improve holding and storing properties of foods. Originally foods with poor holding qualities, particularly the milks from camels, buffalo, goats, sheep or cows, were fermented naturally to produce an acidic-tasting food drink. History suggests that some of the first yoghurts were produced in goat bags and dropped over the back of camels in the hot deserts of North Africa. Temperatures reaching 40°C or 110°F were ideal for lactic acid-producing bacteria to go to work. Since this period, many races have fermented many types of foods in the need for developing new tastes and improving shelf life.

Are there benefits to good health?

It was not until 1910 that the famous Nobel prize-winning Russian Bacteriologist, Elie Metchnikoff, first considered the possible benefit to good health from fermented foods. Initially he noticed that Bulgarians had an average life-span of 87 years, exceptional for the early 1900s, and that four out of every thousand lived past 100 years of age. One of the significant differences in their lifestyle was the large consumption of fermented milks. Since this period studies have looked at the lifestyle of a number of populations and found that the use of fermented food is very common.

Of more recent times the famous Hunzas of Kashmir and the Georgians of what used to be known as the Soviet Union, have been highlighted by their amazing history of longevity. Males of 100+ years participating in horse events such as polo and women working in the farm fields at ages of 100 years or greater, are not uncommon. They are both very active races and have sound basic diets. A significant part of the diet is fermented milks, using active Lactobacilli bacteria. The Georgians are particularly strong believers that health is very dependent on fermented milk consumption. A famous Georgian saying is “IF YOU WANT TO LIVE LONG, DRINK MORE SOUR MILK”.

Throughout the early 1900s, Metchnikoff inspired a surge in the consumption of fermented milks. The bacteria he called Bulgarian Bacillus was believed to contain many benefits to good health; for 30 years people popularised these foods. It was not until 1921 when Retteger demonstrated that Bulgarian Bacillus, later called Lactobacillus Bulgaricus, could not live in the human intestine, that the fermented food phenomena pitted out. Metchnikoff’s theory was disputable (at this stage) and people doubted his theory of longevity.

Since the late 1920s scientists have continued to investigate the possible benefit to the health of bacteria. In 1935, certain strains of Lactobacillus acidophilus were found to be very active when implanted in the human digestive tract. Further research throughout the last forty years has found more and more health benefits using friendly bacteria. Areas such as good digestion, effective detoxification and prolonged food health appear to be all affected by establishing a healthy balance of good bacteria in the gastrointestinal tract.

Of all the families of bacteria researched, the group of bacteria known as the Lactobacilli family has received the greatest attention. Two of the more common forms: Lactobacillus acidophilus and Bifido Bacterium, have the focus of this research. However, the Bulgaricus form, originally discovered by Metchnikoff, is still frequently used in yoghurt production. More recent research is now talking about the Casei form as showing more digestive benefits. Together the activity of all these bacteria appear to play a role in balancing the intestinal flora of the digestive tract and contributing to good health overall.